In this post we be looking through the Aimchess Scouting report generated for myself in the first week of September 2021. At the time of running the report, my rating was 1490 (Chess.com Rapid) 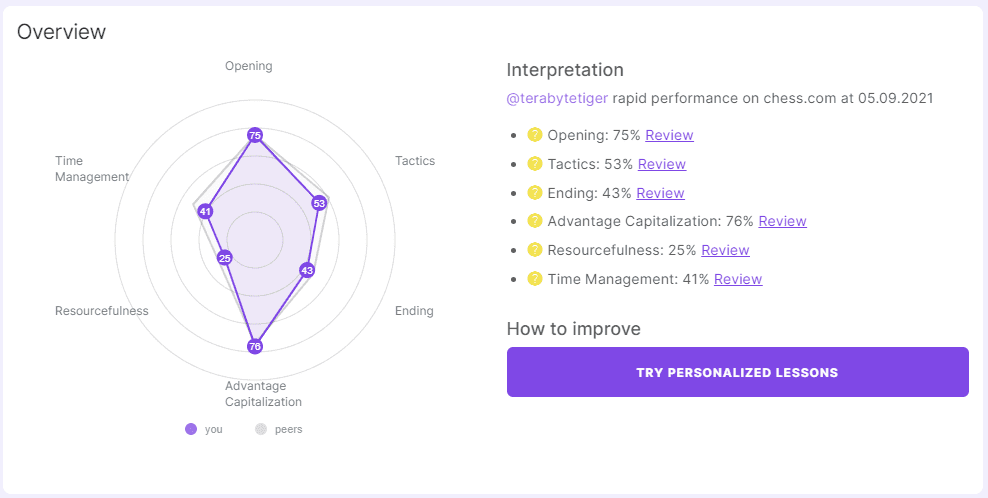 Looking at the overview, it's easy to see that I'm on par with other 1500 players in the opening and... need to improve everything else 😅 In particular, the -8% on Tactics and -10% on Time Management are the largest area I could improve my game and start posing more of a threat to players in my rating range. 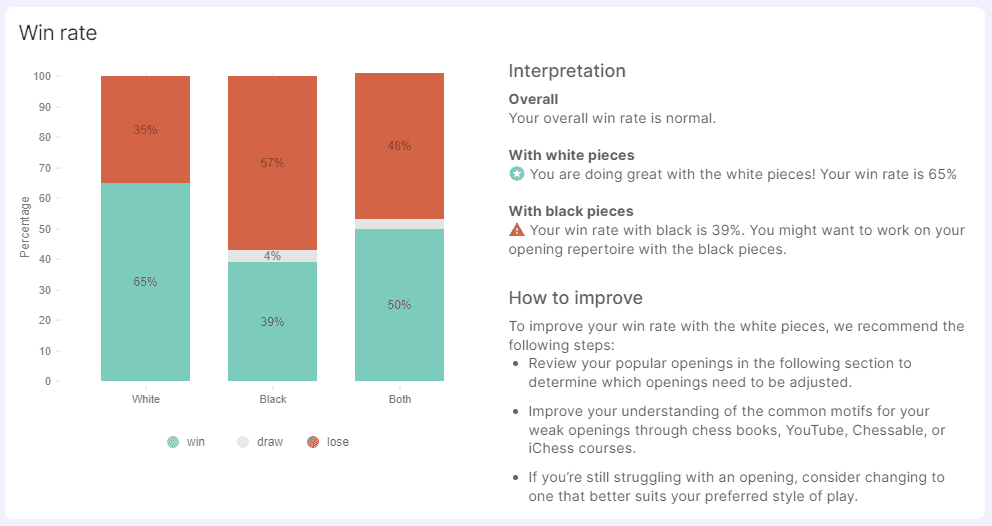 "Perfectly balanced, as all thing should be" - Thanos, Infinity War (2018)

Overall a 50% win rate means I'm generally where I should be as far as my rating is concerned... but I want to be improving. Because I ran this report shortly after getting started again, I'm not sure what openings were exactly playing into this, but I know that before I took a break to go house hunting and move I was playing the London System as white, so a fair portion of the games are probably 1. d4 games. On the black side I was mostly playing the Scandinavian and (apparently) the Pirc Defense. Since coming back, I've started to focus more on 1. e4, but more of that will come in my September AimChess Review (coming soon).

Because these last 40 games are from upwards of over a year ago, I don't have much more reflection to add right now, but I clearly need to improve my game as the black pieces. 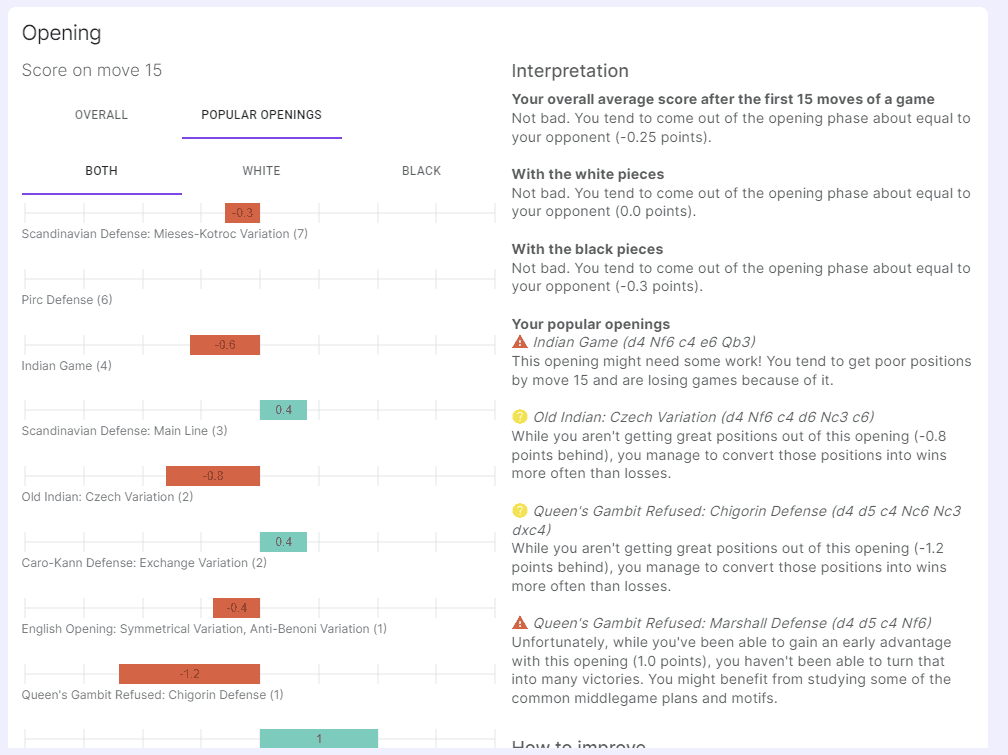 I was fairly surprised to see that I was on par with my peers in the overview when it came to openings. Going into September, I felt I was constantly getting myself into undesirable positions out of the opening. Based on the data here, I certainly was as black (close game in the Scandi and -0.8 or worse vs d4).

While the Scandi had worked very well vs 1200-1300 players, I was starting to run into more balanced games and not catching people off guard and winning an early pawn or two.

My goals for the opening include focusing more on opening principles and mixing in some new openings to my repertoire. 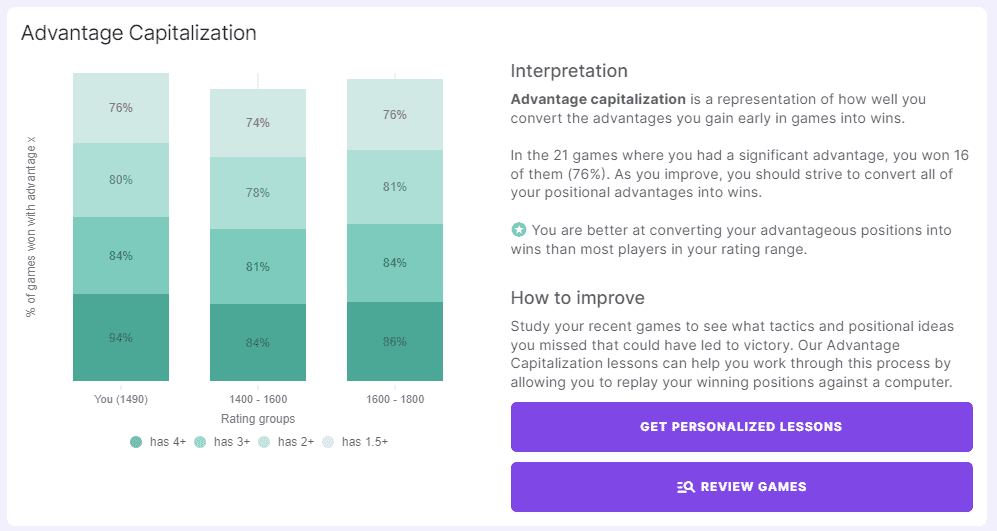 As mentioned in the overview, this was basically my single gold star compared to other players. In my past 40 games I was getting into winning positions about half the time (21/40) and converted three quarters of them (16). Despite this being better than my peers (by 2% lol, so barely better), there is still room to grow here. In particular I would like to see the +4 advantage section of this chart continue to trend upwards towards 100%. 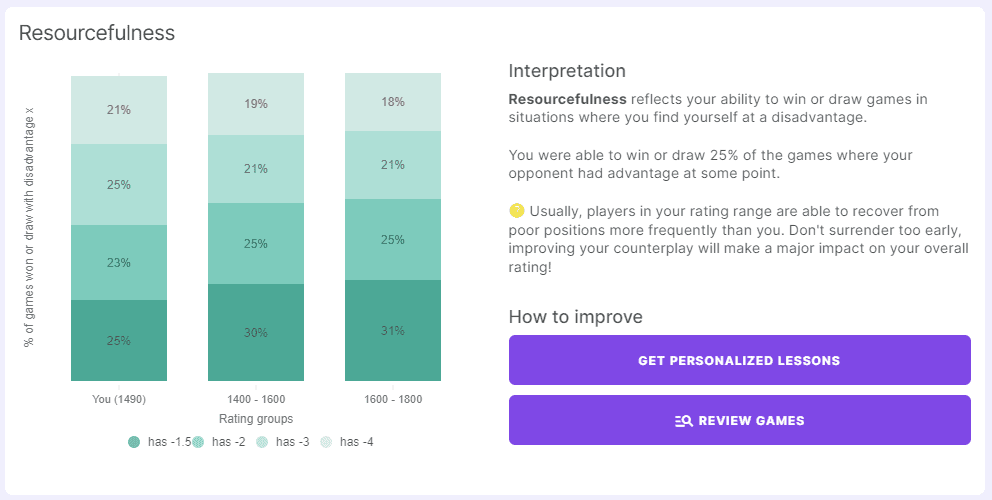 I know the tooltip here specifically is calling out not surrendering too early, but (again) because of how long ago some of these games were, I can't say for sure if that was my problem, or if I was simply falling further and further behind in these games.

This is one of the trickiest sections for me to see how to improve (other than what I will be talking about in the Tactics segment). 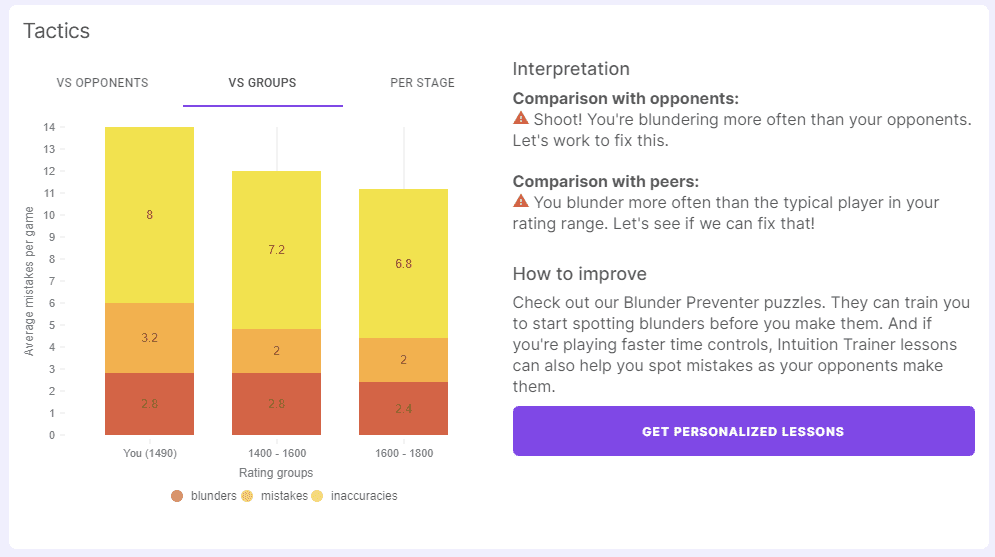 Despite a puzzle rating over 2000, I am blundering, making mistakes, and playing inaccurately more than my rating range. Based on the opening and win rate sections of this report, I'm assuming that the reason I have more blunders but am still climbing in rating is because I'm making many blunders in the same game, pumping these numbers up while not impacting my win rate too much (I'm also assuming I'm making more mistakes playing as black than as white).

Circling back on the puzzle rating - knowing there is a puzzle to solve certainly is a huge part of why my tactics aren't converting to my game play. To help this transition my tactics application I'm planning to spend more time during tactics training and thinking through all of the possible lines instead of leaning into my gut feeling as much. Hopefully the September report will show that taking a slower approach to puzzles has helped improve my tactics rating.

Now that I have a review under my belt with more recent games, it feels good to see that all of these numbers (well, except for time management) increasing. For October, my goal is to work on positional play - particularly I struggle when presented with a position to find what the general plan is for each side. I'm not sure how this will manifest itself in the context of the AimChess report, but we'll find out!