I'll keep this part brief - in high school I got super involved with the Chess Club, working my way up to #1 board in my senior year. I played a few local scholastic tournaments and it looks like my rating is clocking in at the high value of 858/24 Regular and 899/24 Rapid.

Then I went to college, got involved with Magic: The Gathering, and took a 7 year break from Chess.

It would be disingenuous to say "The Queen's Gambit" wasn't what brought me back into the chess world, but it wasn't watching the show that pulled me in - it was the multiple people in my day-to-day life and Twitter and Slack Channels mentioning it casually and planting the seed to re-install the Chess.com app and start playing again.

Looking at my old Chess.com account (started fresh when I came back) I had a 1335 Blitz, 1468 Rapid, 1446 Bullet, and 1414 Daily rating when I quit. This gave me way too much confidence and I set a target of hitting 1400 in Q4 of 2020 from the 1100ish rating I was maintaining playing casually. While I did hit this goal (in blitz - I wasn't playing any rapid games at this time), it involved going way too hard and I took a few weeks off seriously grinding after hitting the goal.

After hitting my 1400 goal, someone asked me what my next target was, and I said "1600, but I don't have an expected timeline for how long it'll take me to get there, especially since I want to start focusing on Rapid time controls." - at the time 1600 honestly felt unobtainable and I thought it would take me multiple years to reach.

During this period of time, my "study" schedule was doing the free number of Tactics Puzzles from Chess.com daily (exclusively solving based on Levy (GothamChess)'s "Checks, Captures, Attacks" approach), playing blitz on my phone every moment I could, and watching chess youtube videos as I was falling asleep every night. For openings, I was leaning heavily on the London System because I knew that people struggled against it in my rating range and didn't want to learn too much theory (feeling like I had to learn a ton of opening theory is part of what made me quit after high school).

Heading into 2021 I quickly saw my rapid raiting continue to climb upwards past the 1400 mark, briefly touching 1500 before dropping back to 1450ish and taking a 5 month break with no rapid games. I was playing some 3+2 blitz during lunch breaks and before bed, but I had stopped solving tactics puzzles during this time other than maybe 1 here or there when I was in the mood.

As much as I would love to say that most of my rating climb has been from the background podcasts I listen to while playing other video games (Perpetual Chess, How to Chess, 64, and Chess Journey) I am self-aware enough to know that in reality this is not the case (although they do offer very helpful insight into practice and study methods and habits).

At some point during a Perpetual Chess podcast, #ChessPunks was mentioned as a great adult improver community and ... I completely ignored it, not remembering the fact that I am in fact an adult as hard as I try to not act like one. The moment of realization came when Ben was talking to someone that (if I recall correctly) was in the 18-23 years age range and made a comment about not wanting to play tactical games against younger opponents because that's where younger players tend to shine.

Since starting to interact with the Chess Punks, I've been a lot more motivated to play games and focus more on where in my game I'm improving even if it isn't leading to more games. I've even joined in the tradition of purchasing a Chess book, opening it once, and putting it on a pile to "Definitely get to later™"!

In September '21, I picked up the Woodpecker Method on Chessable and after struggling to get Chessable set up how I wanted it to work for a few days, I started solving the beginner section of the book. While I never really did cycles the way recommended in the book, spending September focused more on repeating tactics that were significantly easier than what Chess.com's puzzles were offering me helped me improve significantly.

During this time, I also swapped from playing 1. d4 to playing 1. e4 and swapped from Team Scandi to Team Caro Kann (I still don't know what I'm doing vs d4, I just make it up as I go). Initially this led to a dip, but combining a more focused repertoire and playing rapid games before work every weekday over time built into not needing to work on my openings much, and getting me out of the opening safely. Initially, this led to a slight drop of rating, but after the initial drop, the climb continued!

Through the end of October and all of November, I had stagnated a bit at ~1550 - but then the World Chess Championship happened. I watched and just absorbed everything I could from the Giri x Polgar Chess 24 commentary, and I think seeing the ways they approached any given position that arrived on the board really helped reshape and clarify some of the misconceptions I had about understanding positions and planning. Other than absorbing this content, nothing has changed about my "study" plan of:

I don't know if I would recommend this approach, but it sure is working for me right now 😅

So now that 1600 is locked in, time to look onwards and upwards toward the next mountain to climb: 1800 here I come! 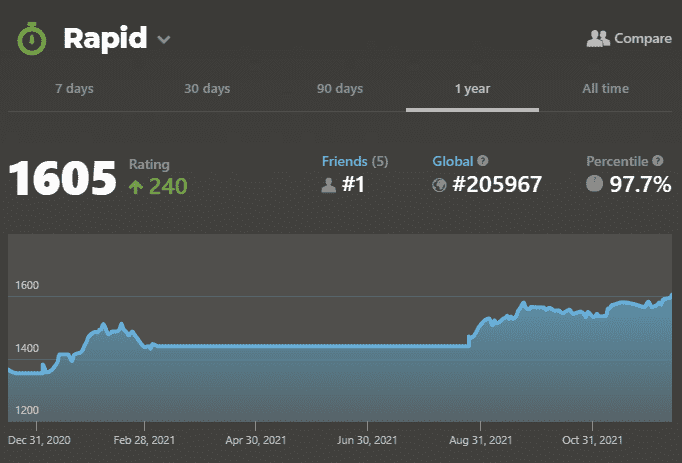